Railway Cluster for Southeast Europe (RCSEE) was the most active participant of three-day event Innorail 2019 in Budapest, a conference and exhibition held from 12th to 14th of November 2019.

In the exhibition, RCSEE was represented through a joint booth, largest at the event, where five cluster members from four countries presented themselves: Altpro (Croatia), ELPA and CGS Labs (Slovenia), Minel GE (Serbia) and MV Automation Systems (Germany) as well as ERCI, European Railway Clusters Initiative.

RCSEE representatives and team members Dragoljub Rajić, Milan Vučković, Marko Radović and Jovan Marković had an opportunity for many meetings with companies, institutions and universities from throughout Europe, and had an opportunity to present railway sector of Serbia and the region as participants at the conference itself.

Apart from them, railway sector in Croatia and ongoing projects were presented by Marjana Petrović from Zagreb Faculty of Transport and Traffic Sciences, also a member of our cluster, at the conference part named “V4+9 Cross-Border Innorail” (supported by the Visegrad fund from Bratislava).

In a terrific atmosphere of mutual support between all actors at the joint RCSEE stand came a high level of cooperation and positive synergy.

Finally, we should remind that RCSEE was one of the “Professional partners” of this event that gathered over 2000 experts and company representatives from all over Europe. 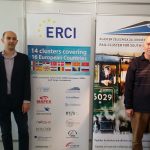