Conference on Clusters in Southeast Europe Held in Dubrovnik

The conference, organized by Wood Cluster of Croatia, and with support of many partners, gathered more than hundred experts for clusters from 12 countries. RCSEE was represented by director, Milan Vučković.

Clusters should encourage increased implementation of innovation, but also a new approach to education, since as soon as 2030 the global economy will become quite different. New skills and new experts are sought that will lead new, futuristic companies, whose needs will include knowledge of futurism, robotics, green energies and environmental responsibility, said Mladen Perkov from „Intelligent Energy Cluster“. Strong support to the topic of competitiveness and role of clusters was given by the representative of Boža Petrov, President of the Croatian National Assembly, Mr. Mario Kristić, who stressed the importance of business networking, especially in tourism, which is very important for the future.

Participants in the conference noted a number of other topics concerning cluster activities, and one of the more important ones is the role of cluster-manager, which is often crucial for the visibility and achieving of positive results, said Vlado Orešković, president of “Croatian Competitiveness Cluster”, cluster of electro-energy and production machinery and technologies.

Milan Vučković presented the functioning of RCSEE and its activities, and noted that it is possibly the only cluster operating on a regional level, and has in only one year generated over 50 members from 10 countries. He also noted that RCSEE , from its founding to today, received no financial support from any state institution, but operates excellent nevertheless due to a competent team running it. „Of course it is not easy to run a cluster, but if it was, everyone would be doing it“ he said, adding that „the primary task of ever good manager is to create nothing out of something“.

Relevant institutions in Croatia have so far strongly supported business networking, and in the past few years 27 million HKNs were invested in networking of 504 companies, that employ a total of 25,000 persons, said Tatjana Kesić Šapić, director of Sector for Industry and IT in Croatian Chamber of Commerce, which itself supports a number of presentations of Croatian companies on fairs world-wide.

Finally, Mr Marijan Kavran, director of „Wood Cluster of Croatia““, together with his team received praise from all participants for impeccable organization of this two-day conference, which included a facultative visit to Dubrovnik by ship on the first day. 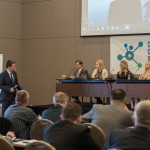