On the Electoral Assembly of the Pro Rail Alliance, held in Zagreb on 2nd February 2017 new management of PRA was elected, that for the following four years will be governed by the president of Railway Trade Union of Croatia, Zoran Maršić.

Maršić took over the position from Branko Kreš, who performed the duty of the president of Pro Rail Alliance since its creation, for almost 9 full years. During the takeover of duties, Maršić thanked Kreš for the persistence and the effort he dedicated to the work of the Alliance, while the departing president said: “We found the Alliance in the period of crisis, and believed that we will help in the revival of railways, as an important topic in the society, through our activities. It was difficult, but we have preserved, thanks to the members that supported us. I thank from all my heart to everyone who has supported the work of the Alliance in all these years, and recommend them to continue doing so, as there is still a lot of work for the Alliance”

The Assembly also elected the new Presidency of PRA, that is, aside of the President Maršić, made of his deputy Zvonimir Viduka from Altpro company, Renata Flinta from Croatian Railway Infrastructure, Mirjana Konjić from the Croatian Railway Infrastructure Trade Union and Dragutin Staničić from the Association of Railway Painters “Blue Light”. After the assembly PRA Presidency held its first session, where they agreed upon the work methods and decided on the first important activity in their mandate, which is soon to be announced.

Finally, Assembly elected the Court of Honor of PRA, that in the following four years will be run by President Dražen Vidović from RŽV Čakovec, and the members are Tomislav Prpić from Croatian Railway Passenger Transport and Damir Kosalec from Pružne građevine Ltd. Marijan Jelenski from Croatian Railways Trade Union was elected as a new liquidator. 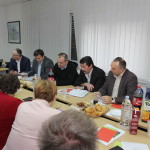